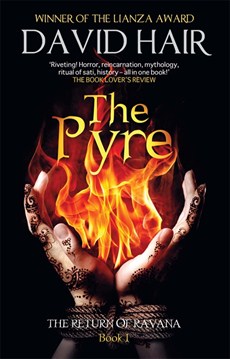 As The Exile, the third in David Hair’s epic The Return of Ravana series, inspired by Indian folklore and mythology, will be coming out in only six days, we thought it was the perfect time to revisit number one – The Pyre.

One deathless Demon King. Six ghostly queens. And only four twenty-first century young men and women to stand against a centuries-old evil . . . The first in award-winning author David Hair’s series The Return of Ravana.

Mandore, Rajasthan, 769 AD: the evil sorcerer-king, Ravindra-Raj, has devised a deadly ritual. He and his seven queens will burn on his funeral pyre, and he will rise again with the powers of Ravana, Demon-King of the epic Ramayana. But things go wrong when a court poet rescues the beautiful,spirited Queen Darya, ruining the ritual – and Ravindra’s plans.

Jodhpur, Rajasthan, 2010: At the site of ancient Mandore, Vikram, Amanjit, Deepika and Rasita meet – and are forced to accept that this is not the first time they have come together to fight the deathless king. Now Ravindra and his ghostly brides are hunting them down.

As vicious forces from the past come alive, Vikram needs to unlock truths that have been hidden for centuries, if they are to win this ancient battle . . . for the first and last time.

‘Riveting! Like its reincarnated heroes, I was drawn again and again to David Hair’s gripping, blood-soaked tale’ – Chris Bradford, author of Young Samurai

The journal was right where he remembered putting it thirty years ago, buried two feet beneath the distinctive stone slab. It was wrapped in waterproof greased leather, in a painted wooden box that crumbled, rotten with age and damp, when he dug it out. To his considerable relief, it looked like no one had touched it since its burial. The pages were cotton cloth at the front, then varying grades of paper that became more refined as he flicked through. The book smelled musty and the binding was frail. Some of the oldest pages, the cotton ones at the front, were more than a thousand years old, and it was to the first page, the earliest, that he went. The script was ancient, but he found he knew it and translated it mentally as he traced the lines with a trembling finger, not quite daring to touch the page.

If you are reading this journal, then I hope you are me you know what I mean.

I have come to believe that certain stories develop a life of their own. They are powerful because they are so widely known, so much a part of our culture – indeed, of our daily lives – that they become more than mere words.

Imagine, if you will, a tale that defines a people. It has heroes and villains, good and evil deeds; its very words are sacred to us. It is like a chess set, its pieces inhabited by the same souls, game after game. Or perhaps this tale is a living thing, a script that constantly seeks actors, and when it finds them, it inhabits those actors and possesses them utterly, finding new ways to express and re-express itself, time and time again.

What must it be like to be one of those souls, doomed to live the same life time and again, over and over, always acting out the tale, sometimes glorifying it, sometimes enhancing it, and always at great cost to themselves, for their whole existence is a prison sentence. Their fate is to live constantly as a plaything of an idea.

Such a story is like a tyrannical god, inflicting itself upon unwilling worshippers.

I know this is real, because I am living such a tale, and I am doomed to live it over and over, for ever more – and by ‘I’, I mean ‘you’.

Over and over and yet again.

As he focused on the brief verse that followed, a thrill of unease – the same shivery feeling he always got when he saw those words – made the hairs on his arms stand up.

Time is water from the well of life

My thin and fragile fingers cupped to receive it, every drop precious

But ere I have raised it to my lips, it has drained away

And finally be free

He blinked rapidly, remembering the last time he’d written those words, two years ago. He’d had to do a poem for English and though he’d had no idea then why, it had been one of the easiest assignments ever. The words had just flown from his pen, almost as if he were just copying out someone else’s work. And when his teacher had asked him what he was trying to say, he’d started, ‘It’s about reincarnation—’ and then stopped; he knew the poem did mean something important, but that was about as close as he could come to explaining it to someone else.

But that hadn’t mattered, apparently, because the teacher had entered his work in the inter-schools’ Poetry Cup competition that year – he’d been a little surprised how thrilled he’d felt when he’d got up in front of the whole school to accept the trophy from the headmaster.

And yet here were those very same words, set down in a strange – and yet not unfamiliar – hand on a page that predated paper in a journal his forebears (if that was the right word) had been keeping for more than a thousand years.

He put the journal down. He would read it properly that night – though he knew already that the words would be as familiar as if he had written them yesterday.

There was one other thing hidden with the journal: a small leather pouch. It was empty. Strange; I almost expected the necklace to be inside this time. His hand still remembered the shape of the pendant: a pale crystal veined with burgundy streaks set into a tarnished decorative metal surround. He’d never forgotten the way it used to pulse queasily at his touch. Where the necklace was now, he had no idea.

The journal was unique, a scholar’s dream, but he had no intention of showing it to anyone. He had begun writing it many lifetimes and more than a thousand years ago, a record of his life that was centuries old; though the last time he had buried it was just thirty years ago.

And he himself was only seventeen years old.