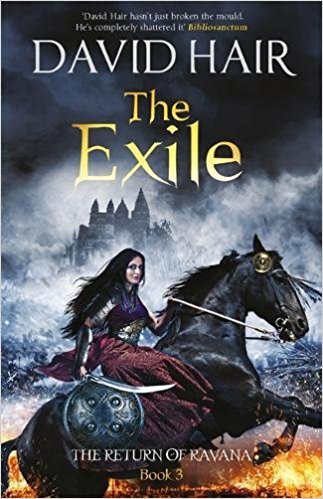 Another Thursday, another thrillingly exciting publication, and this time it’s David Hair’s eagerly anticipated The Exile, which continues the adventures of The Return of Ravana,  his Indian-mythology-inspired contemporary fantasy series, following four young people on an action-packed race through time to stop a demon king. So happy book birthday, David, and may there be many more! Without further ado, the book!

Ravindra is back, and close to his dream of becoming the Demon King Ravana once and for all – unless Vikram, Amanjit, Deepika and Ras find their own powers, evil will overwhelm the world . . .

Bollywood superstar Sunita Ashoka’s reality show Swayamvara Live! has ended in bloodshed and disaster, and Vikram, Amanjit and Rasita are on the run, accused of her murder. And just like the heroes of the Ramayana, they soon find themselves beset by the same perils as Rama, Laksmana and Sita.

When an unexpected death forces Vikram into the open, they start to despair – but there is some hope: Amanjit’s warrior skills are returning, Rasita is beginning to remember her own past lives, and Deepika is awakening to terrifying new powers.

But the enemy, Ravindra, has also found allies: the nightmarish Rakshasa army.

Memories and legends are coming alive all over India. The fight to the finish has begun . . .

The Exile is out in paperback and ebook today (January the 11th) and can be purchased from major retailers and on Amazon.