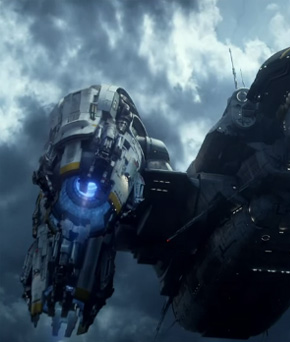 So many spaceships. When Molly asked me to compile a list of my ten favourite ships, I came up with over thirty without really trying. A lot of these were from the Star Wars universe, so I limited myself to only one from that franchise. If picking ten was tough, ordering them was even worse. I freely admit nostalgia has played a large part in this process.

I fear I am a little obsessed with the space-sim Elite Dangerous. Going on looks alone, my preferred vessel is my Diamondback Explorer, Iron Chicken. This is my souped-up runabout (with a max jump range of 57ly for those interested in such things) and I like its functional Lakon looks — both externally but also in the stripped-down cockpit, which is fantastic in VR.

I fell in love with Buck Rogers’ pointy-pointy fighter as a child, but it was only while researching this post that I discovered it was called a Thunderfighter. Unfortunate name for a mean-looking ship. Also, Wilma Deering. Need I say more?

Not the best film in the world, but a wonderfully realised ship. After all, how can you wrong with four nacelles? Reminds me a little of something out of Thunderbirds, but cooler.

No great surprise here. I imagine the fastest hunk of junk in the galaxy would make the list for most children of the 70s and 80s. I own several models of the Falcon, from the big Lego version down to the tiny and superbly detailed X-Wing Miniatures offering. Flying her in X-Wing Alliance was always a pleasure. A VR version in the vein of Star Trek Bridge Crew would be great.

Appearing primarily in Iain M Banks’ Excession, the General Contact Unit Grey Area is a marvellous character. A psychopathic vessel obsessed with genocide and pain, it is reviled by its fellow Minds, who call it Meatfucker because of its penchant for using its effectors to probe human minds without consent for its own nefarious purposes.

‘Prep for dust-off. We’re going to need immediate evac.’ If the Colonial Marines are influenced by the Vietnam movies of the 80s, then the Cheyenne is their pimped-out Huey. Its rugged, functional looks and olive drab finish imbue it with a gritty and menacing realism, and I don’t think the Cheyenne wouldn’t look out of place on a modern airbase.

Everything about this ship makes me want to operate one as a pirate vessel. From the predator-like looks to its cloaking device, and with enough cargo capacity to fit not one but two whales, it would make an ideal smuggling vessel or commerce raider. (Let’s not talk about the Klingon ships in Discovery, though.)

Growing up on a diet of 2000AD, Nemesis the Warlock was one of my favourite strips. For the first couple of stories we never saw the demonic alien antihero himself, only his arrowheaded blitzspear wreaking havoc on the xenophobic Termight Empire. How Nemesis came to tame the sentient Seth is explained in the wonderful and David Attenboroughesque story ‘The Secret Life of the Blitzspear’. Well worth a read.

I like my spaceships grubby and industrial. Give me a Nostromo over a sleek Naboo clipper any day. I had two Dinky Toy Eagles as a kid, and I find the practical design very appealing (even though mine were the weird green and blue ones rather than the more correct white version). The way the Eagle variants we see in Space 1999 all use standard modules, such as the cockpit pod, lends a further touch of authenticity to this classic design.

So this is it: number one — and I’m very happy with my choice. It’s rare for a reboot to improve on an original ship, but BSG managed it with the Viper Mark II. Smooth and sleek with a nose I want to die for, the Mark II captures the essence of its 1978 predecessor and makes it sing.

The Mark VII though? Not so much.

And there we have it. I feel this may prove a contentious subject, so if you want to berate me for missing your favourite ship off the list, or simply chat about all things SF, you can find me on Twitter as @DominicDulley.