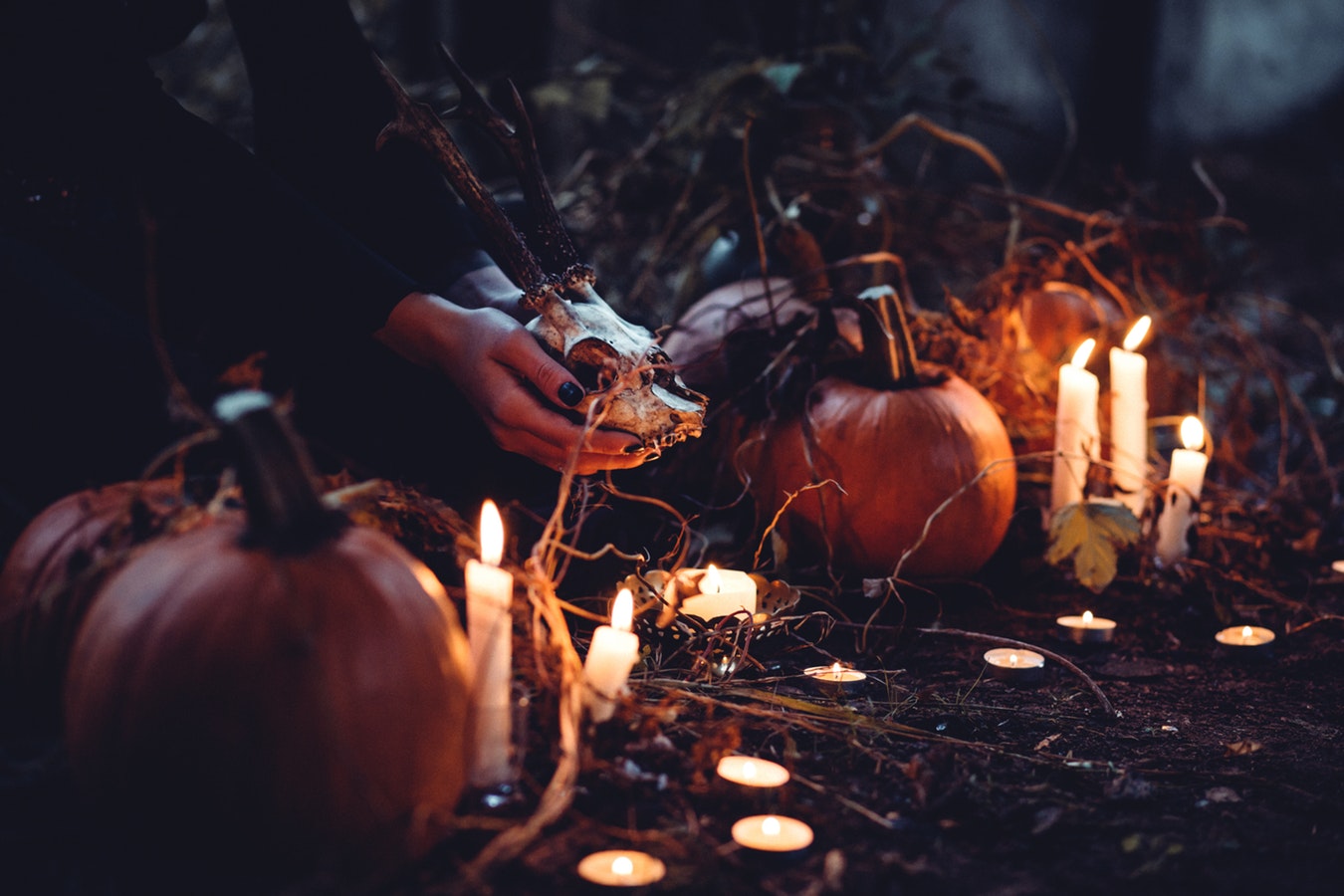 It’s Hallowe’en, the spookiest time of the year. The temperature has dropped, those balmy summer evenings nothing now but a memory, and the moon hangs heavy in the sky as the year turns towards its end. The leaves have fallen and now rustle underfoot, trampled by eager Black Panthers and Wonder Women, Daenerys Targaryens and Jon Snows, vampires and Dementors, werewolves, witches and demons prowling the neighbourhood in search of bounty . . .

You may think Hallowe’en is purely North American, but in fact it started out as a Celtish practice: they believed that as the year ended, the dead and living overlapped and demons roamed the earth – and only by dressing up as demons could they protect themselves.

When Christianity arrived, the Powers That Be decided the easiest way to integrate was to appropriate holidays and festivals that already existed, so All Hallows Eve, All Souls Day and All Saints Day became fixtures in the Christian calendar, and children would go from door to door begging for money and soulcakes in exchange for prayers for the dead:

An apple, a pear, a plum or a cherry

Or any good thing to make us merry

One for Peter, two for Paul

Around the 1920s this transformed into what we now know as Trick or Treat – so you see, really it was ours all along!

And what better way to celebrate Haollowe’en than by curling up beside a flickering pumpkin with a pile of great horror stories?

I was told to pick my top five, and frankly, that’s impossible, not least because the list changes as often as my Desert Island Discs do . . . so I’m going to talk about five of the most influential instead.

I have to start with I Am Legend by Richard Matheson, one of the absolute classics. Robert Neville is the last man alive on earth . . . but he is not alone. By day he is a hunter, stalking his tormentors through the ruins of civilisation. At night, he barricades himself in his home and prays to see another dawn . . . for every other man, woman and child has become a vampire, and they all want his blood. This is a novel of absolute, unrelenting menace, and it’s the reason Stephen King, Ray Bradbury, Harlan Ellison, Neil Gaiman, Anne Rice, Joe Hill, Brian Lumley, Steven Spielberg and many, many more list Matheson as one of their most influential writers. Ignore the film and read the book. You’ll thank me.

Next is Ray Bradbury, and Something Wicked This Way Comes – and just writing those words triggers the sound of the calliope which heralds the arrival of Cooger and Dark’s Pandemonium Shadow Show. The music goes spiralling through my soul, sending chills shivering up my spine. Never forget, innermost wishes always come with a price: if it seems too good to be true . . .

I’m going to go back in time now, to 1612 and John Webster’s The White Devil, one of the great Jacobean revenge tragedies. All right, it’s a play, not a novel, inspired by true events in Renaissance Italy, but I promise you there’s enough death, torture, hypocrisy, revenge and general double-dealing to suit the most bloodthirsty of readers. The Duke of Brachiano murders his wife because he wants the beautiful, if impoverished, noblewoman Vittoria (who’s also inconveniently married), triggering a cycle of brutal deaths, deceit, revenge and insanity. I last saw it staged by candlelight and it was both mesmerising and terrifying watching villains, victims and conspirators create an increasingly intricate and unbreakable web of scandal and destruction at every shadowy turn.

You know all about Alison Littlewood’s wonderful gothics The Hidden People and The Crow Garden (and if you don’t, go out and buy them at once). What I love about them is that they make me feel the same way as when I first read Shirley Jackson. The Haunting of Hill House, about as perfect a haunted house novel as you could hope for, is a wonderful slow-burning psychological horror story about four people trapped in a haunted house. But even better is Jackson’s last book, We Have Always Lived in the Castle, about Merricat Blackwood, her sister Constance and their Uncle Julian, the last surviving remnants of a grand old family poisoned by arsenic in the sugar bowl. Merricat had been sent to her room without supper, Constance didn’t use sugar and Uncle Julian had just a little, so he survived (although his health and sometimes his sanity are damaged as a result). The villagers all believe Constance to be the murderer, and the children always sing a charming little rhyme if they come across Merricat on one of her infrequent visits for provisions:

‘Merricat, said Connie, would you like a cup of tea?

Merricat, said Connie, would you like to go to sleep?

Down in the boneyard ten feet deep!’

Then Cousin Charlie comes to visit, all obsequious, conniving charm, and Merricat, convinced he is nothing but a gold-digger, determines to do everything she can to protect her family. The writing is sublime – like all my choices, of course! – and the tension builds like a thundercloud, but there’s a delicious humour that makes the dark even blacker, the fear even deeper, always one of Shirley Jackson’s great talents.

And finally, I’m cheating a little, because like many of us I was first drawn to horror as a very small child, when my grandfather read me the stories of the Brothers Grimm and Hans Christian Anderson. And for that reason, I’m choosing Fearie Tales, edited by Stephen Jones, because it’s such a perfect mix of old and new. Writers including Neil Gaiman, Joanne Harris, John Ajvide Lindqvist, Ramsey Campbell, Garth Nix, Angela Slatter, Christopher Fowler and others, have each chosen a Grimm’s fairy tale and reimagined it in their own unique style – and the book includes the original story as well as the retelling. As if that’s not enough, it’s illustrated throughout by Lord of the Rings conceptual artist Alan Lee. How could I resist?

And just so you know, even writing this I changed my mind at least a dozen times. I could have included much-loved favourites like Karl Edward Wagner’s Darkness Weaves With Many Shades, the evocative Song of Kali by Dan Simmons or Robert Holdstock’s magical Mythago Wood. And what about the greats: Mary Shelley, M.R. James, H.P. Lovecraft, Robert E. Howard, Bram Stoker? Or Stephen King, Clive Barker, Angela Carter, Elizabeth Bowen . . . and that’s without even mentioning a whole new crop of modern masters of horror breaking onto the scene.

Everyone will have their own Top Five. What’s yours?

* Listen to the spin-chilling version of ‘Souling Song’ by the Watersons, from Frost and Fire: https://www.youtube.com/watch?v=VQ20dtnZG14