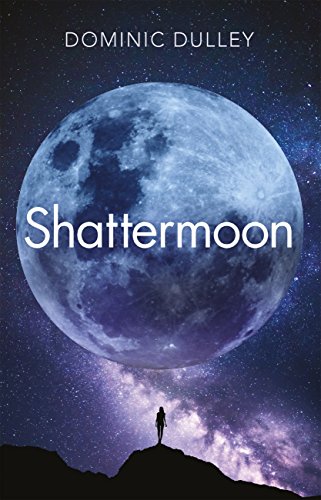 With Shattermoon about to come out in paperback, I thought I’d write a little something about my influences and how I set about writing the book.

Shattermoon was the third novel I finished, and the first to get published. I’d always wanted to write a space opera, and my previous efforts in other SFF sub-genres had taught me that sticking to one protagonist’s point of view was easier than switching between a large cast of characters. Having said that, I didn’t want my main character to be alone, and so the first thing I did was think about two characters that would complement one another but also provide opportunity for tension and humour.

Perhaps my favourite fictional relationship is in the western True Grit, where a grizzled old marshal is reluctantly saddled with the headstrong young girl who hires him to help her search for her father’s killer, and so I started thinking along those lines.

The main character would be a young woman of twenty or so, called Aurelia Kent but known to everyone as Orry. The old man would be a loner, a grumpy and irreverent space hermit named Jurgen Mender, who just wants to be left alone. I knew as soon as I had sketched out these characters that the chemistry between them was strong. I wrote some test dialogue and found myself laughing aloud at some of the things the two of them said to one another – a good sign.

Now I had my main characters, and the kernel of a plot in which Orry’s father is killed and she engages Mender to help her hunt down and punish his murderer. Next, I needed to know where all this was happening.

I wanted a grand backdrop for my characters to play in, a mature, star-faring civilisation with many possible locations. I created the Ascendancy, an empire ruled by the Imperator Ascendant, Piotr, for the benefit of decadent noble families with enormous wealth who reside on the seven advanced worlds of the Fountainhead, in stark contrast to the settlers scrabbling for survival on the distant and more primitive colony worlds. The Grand Fleet projects the Ascendancy’s military might, while the ruthless Arbiter Corps enforces its laws.

I enjoy worldbuilding, and I had a ball coming up with exotic locations which my characters could visit and (usually!) narrowly escape without being maimed or killed – from Cordelia’s Roag’s repurposed mining rig above Tycho IV to the honeycombed interior of the Shattermoon, from the sprawling city of Usk to Mama Jinx’s orphanage perched above the jungles of Erlitz Shen.

With a backdrop in place, the hard work of fashioning a plot began, and I started perhaps my least favourite part of the writing process: the first draft. A moment of enlightenment came near the end of it, while I was reading Scott Lynch’s wonderful The Lies Of Locke Lamora. I fell instantly in love with the eponymous protagonist, a skilled con artist, and remembered how much I had enjoyed Harry Harrison’s Stainless Steel Rat stories as a teenager. As soon as I decided to make Orry a grifter everything else fell into place. It was a decision that required pretty much re-writing the entire book, but it was worth it. From this came the opening con at the Count of Delf’s mansion, Orry’s relationship to the Count, the ancient gem that leads her to the Shattermoon and its mysterious occupant, the dust avatar Emissary, and much more.

Orry is not alone in her adventures, and I also had great fun coming up with a supporting cast: the rather tragic raider Dyas and his psychotic robot sidekick Jericho, crime lord (lady?) Cordelia Roag, and the spoiled young Ruuz noble Harry, who provides some romantic interest for Orry between all the deaths. And then of course there is Mender’s sentient ship, Dainty Jane. If Mender becomes a reluctant father figure for Orry, then Jane is her surrogate mother.

One of my favourite elements of Shattermoon, which I have continued and explanded upon in the sequel, Morhelion, is the complex relationship between Orry and Piotr, the Imperator Ascendant. I have a clear character arc in mind for Orry over several books, and her relationship with the Imperator is a critical one for her to fulfil her destiny.

Shattermoon is a face-paced thriller set in space, a non-stop chase in which the stakes are higher than anyone could imagine at the start. As well as being a standalone story in its own right, it is also the start of The Long Game series, in which Orry will undertake a much longer journey; one which, at its conclusion, may end in a way that on-one expects.

Shattermoon is out in large format and ebook now, with the paperback available from January 24th 2019.

Orry’s adventures continue in the sequel, Morhelion, due for release in April 2019.