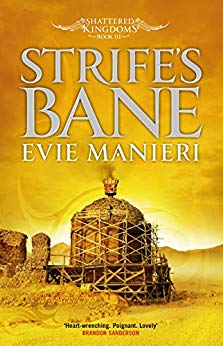 To celebrate the publication of Strife’s Bane, the final instalment of The Shattered Kingdoms series, in paperback, Evie Manieri takes us through ten things the women of the Shatter Kingdoms most certainly are not.

One day, the debate about what makes a Strong Female Character will cease. I know I’m an optimist, but I think we’re getting there. Lots of writers are crouching over their keyboards right now, producing fantastic female characters. It’s glorious.

The Shattered Kingdoms features a lot of women. A lot. They vary widely in terms of age, occupation, sexuality, and circumstance. None of them think or act alike and most have little in common. What they do share are things they aren’t and don’t do.

So I thought I’d share this list. If it helps you, great, but it won’t work for everyone and I’m not in the business of telling anyone how to write. Except for #10. Don’t do #10.

Happy writing! And go ahead and smash the patriarchy if you feel like it.