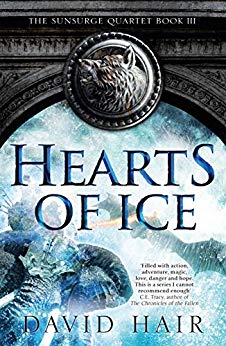 The third book of my epic fantasy series The Sunsurge Quartet – entitled Hearts of Ice – comes out in March 2019, and I’ve just finished drafting the fourth book. As the series has progressed its political content has caused my publisher to ask for a blog about its politics: here’s that blog.

The first thing to say is that this series was planned well before the current global political meltdowns began: neither the Brexit vote nor the last US Presidential election campaign had kicked off. So although these books have political content, those events didn’t inspire them – though they’ve certainly influenced them.

In Sunsurge, Lyra, an innocent young woman, is plucked from a convent and thrust onto an empty throne because she happens to be of the right lineage. This idea isn’t new – many, many fantasies deal with a disenfranchised prince or princess “claiming their birthright”. But I was resolved that this wasn’t going to be that story. Because the idea of a “birthright” annoys me: that some “special” entitled royal, divinely-ordained hero is born with more rights than other people, and that a kingdom/country/society can only function if that person is in charge.

So what I wanted to do in Sunsurge was deconstruct the notion of dictatorial rule – by starting off the series as if it was a traditional fantasy about a rightful ruler, then tearing that illusion apart. Lyra tries valiantly, but she makes mistakes and her power fractures. Meanwhile a proto-democratic movement forms, and in many ways the instigator of that is the true hero of this story. The outcome is not typical of traditional fantasy.

However, to pull readers along, I had to balance those themes with a story containing drama, excitement, and genuine heroes and villains. Lyra isn’t an unsympathetic character – she’s courageous, resourceful, resilient, and has a sound moral compass despite her inexperience. Her failings stem from the impossibility of the task she faces. If you give one person ultimate power, then their every failing is magnified. In Sunsurge, Lyra’s reign is failing because monarchy, the darling of fantasy writing, is an inferior form of government.

Of course, when I sat down to write, I couldn’t help but notice that a cadre of lying fundamentalist bigots had managed to get a fascist buffoon elected to wage his war on truth via Twitter; and that racist, sexist, homophobic nationalism was gaining the upper hand in too many places. I’m proud that New Zealand has elected a progressive leftwing government during such a period. And certainly some of my feelings about all this manifest in Sunsurge – particularly the speeches of the leader of the proto-democrats.

But Sunsurge isn’t just a political story: there’s magic, battles, romance, daring rescues and escapes, shock revelations, humor and pathos. It’s a book about people who transcend factions, finding friendship and love in so-called enemies through their compassion and humanity, and whose triumphs arise because they trust each other, when the other side are divided by lies and self-interest.

New Zealand’s Prime Minister, Jacinda Ardern, speaks of rising above divisive politics, and I’m all for that. Politics should be the interplay of ideas, in service of society. The governance of society is too important to be treated as a warzone.