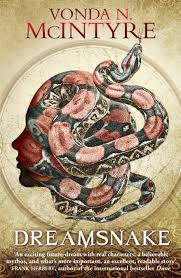 Vonda N. McIntyre died at 6:25 pm, Pacific Time, in no pain and surrounded by friends. Vonda was diagnosed with pancreatic cancer on February 7, less than two months ago. Her dedicated band of friends and caregivers have let me know that they’ll be organising a reception within about a month (probably in Seattle, where Vonda lived). I have two of Vonda’s books on the JFB list, thanks entirely to Lisa Tuttle, who met her old chum Vonda, quite by chance, in the Palace of Versailles in 2014 and got chatting about her then-unpublished-in-the-UK historical fantasy novel The Moon and the Sun – Vonda was in Paris because the book was being filmed. Vonda told me, ‘I was at Versailles for three all-night shoots in the Hall of Mirrors. The production had unprecedented access to the place. One of the scenes they shot in the Hall of Mirrors was a dance sequence that I think will blow people away. Pierce [Brosnan] did his part all himself and his last scene was at 5:30. In the morning. Sean (director) said, “Cut! Genius!” and it was. The musicians were amazing as well. Pierce came over to look at the playback and I said, “You must be nuclear powered.”’ Vonda loved that book, and so did I.

It’s a huge shame that the movie (retitled the King’s Daughter), never made it . . . And for all the book rightly won the Nebula in 1997 when it was first published (beating A Game of Thrones by George R. R. Martin!), it’s never really taken off the way it deserves. But the great thing about books is that they at least never die: I have both The Moon and the Sun and her first novel, the awesome Hugo- and Nebula-winning  Dreamsnake, and the rest of her backlist are available on Book View Café. If you’ve never read her, give yourself a treat. You’ll thank me.  And for now: good-bye, Vonda. You have enriched our lives.