Increasingly addictive . . . Adult fantasy lovers who enjoy historical fiction and intricate political plots will love this book . . . epic
A BOHEMIAN MIND AT WORK
Empress of the Fall is a sprawling epic fantasy of grandiose proportions . . . with a hearty taste of blood and gore, and plenty of vicious politics
ANGELA OLIVER, author of Fellowship of the Ringtails
I continue to be impressed by the way Hair takes some very familiar, almost trite, ideas and spins them in a new way. Epic fantasy is not dying, my friends, it is just moving in new directions
FANTASY REVIEW BARN
The Moontide Quartet is perhaps the most understated fantasy series currently being written. It features a wide, diverse cast of characters spread out over dual continents. Focusing on a clash of civilisations storyline, David Hair offers a tale that encapsulates epic fantasy to its entirety
FANTASY BOOK CRITIC, The Year’s Top Ten
One of the best examples, in recent memory, of epic fantasy
NOVELNAUT
A remarkable series
SFFANZ
True epic fantasy. It has everything a fan could want - detailed magic, good characters and evil characters (of both genders) and some in between, a compelling plot, and twists aplenty
A BITTER DRAFT
This is a series I cannot recommend enough
C.E. TRACY, author of Chronicles of the Fallen
Amazing, The Moontide Quartet epic fantasy series. I'll not reveal all the details and plots, you'll just need to read these books. It will make you turning pages at the speed of a desert storm
DEJAN DELIC DEVIANT ART
A complex world populated by a rich and diverse cast of characters . . . There's a little something for everyone here - conspiracies, political backstabbing, high magic, swordplay, a smattering of romance, and more . . .Recommended for fans of George R.R. Martin, Brandon Sanderson and Patrick Rothfuss
MONSTER LIBRARIAN
A page-turning adventure filled with excitement and intriguing characters. For those loving an epic fantasy with plenty of sword-fights, gun-play, bare-fisted combat and battles between sorcerers, this book's for you
AMAZING STORIES on Map’s Edge
These characters . . . have found a confidence on the page which somehow endears them more to the reader
BRITISH FANTASY SOCIETY on Prince of the Spear
Massive but focused, every character POV is interesting and none of them seem cliché, the magic and world is great
BRIAN'S BOOK BLOG
Hair is adept at building characters as well as worlds, and his attention to his female players is welcome in a genre that too often excludes them
KIRKUS
Beautifully written, a fantastically epic tale spanning two continents, with flashes of the Crusades combined with wonderfully inventive magic. It's grounded in believable characters that I loved and hated, and full of action and heartbreak. And knights flying into battle on winged horses - how cool is that!
JOHN GWYNNE, bestselling author of Malice on Empress of the Fall
Vibrant, memorable characters are littered across the landscape and the Lantric masks are a great piece of detail. For anyone looking for a new sprawling fantasy epic to stick their teeth into, Empress Of The Fall is an ultimately satisfying journey into a fascinating and chaotic landscape
SCI FI NOW
Classic immersive fantasy
RIBBON REVIEWS 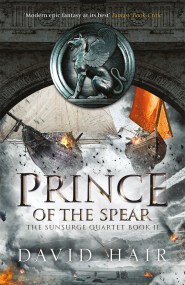 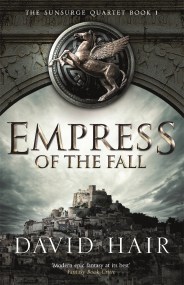